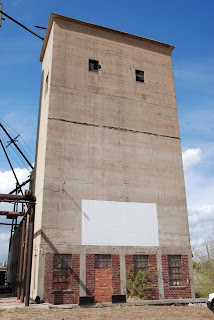 The show on April 19 was a great opener for the 2008 season. There was a decent turnout considering the expectation of a passing spring storm and the cool conditions. I hope everyone enjoyed the movie. I know there are some corny parts to it but that’s part of what makes 80s movies so great. Still, I have to say, after watching the climbing sequence again I am impressed that it all was accurate – there were not any shortcuts that Hollywood-ized the climbing and made it unreal. Except I did notice when Alan was hanging in mid-air he had two opposed carabiners clipped to a single non locking carabiner – what was the point in that?

Another thing that I was even more impressed by in watching the movie some 15 years later was the final canoing scene. The cinematography was pretty amazing and those must have been class 6 rapids.

The new screen worked wonderfully. I think the image looked SO much better on the flat surface versus seeing it on the curvature of the silos like last year. Still watching it on the silos gave the experience a unique feel.