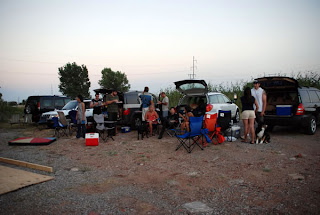 The turn out for the BL show on Saturday night was awesome. We had about 40 people show up, maybe more. It was a warm evening, as it’s been hovering around 100 degrees for the past week here in central Oklahoma – but the evening cooled off to about 80 degrees and there was a nice breeze.

The evening began with some Renegade grilling. Russell showed up with his grill and cooked everyone burgers. Next up was the bowling. The bowling alley was constructed on the previous day by Chris and I (Aaron) using some plywood that the owner of the climbing gym, Freddy, let us borrow. We really lucked out when we discovered that there were two bright red stars stenciled on a couple of sheets of plywood. That really added to the bowling aura. It didn’t take much time to lay the plywood down and construct the gutters using 2x4s. At the end of the lane there was a chain-link fence that acted as the backstop. 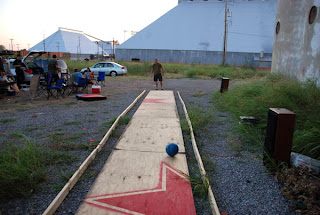 The lane was 48 feet long – not regulation but then again, nothing about this evening was regulation. The bowling pins were acquired from ebay for $10 (but $30 for shipping) and the ball was purchased for $10 from a lady at work. I’m sure she thought I had good intentions when I bought it. Little did she know that it would be rolled across gravel and plywood and slammed into a metal fence. That ball took a beating. 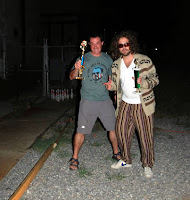 Honestly, I had not even considered having a bowling tournament – I thought we would just throw a few and have everyone take turns. But when there’s trophies involved I guess you have to step up the game a little. Luckily, our good friend James came through with some pre-made bracket sheets and that enabled us to organize things a little more and allow everyone to participate in the tournament. It was a head-to-head competition with everyone getting 2 rolls at a full set of 10 pins. The turns were added and the highest of the two bowlers moved on to the next round. There were 30 bowlers and we whittled it down to two for the finals: Adam and Andy. In the end, Adam snuck out a victory narrowly dropping an additional 1 pin for the win of the first ever Renegade Bowling Tournament. 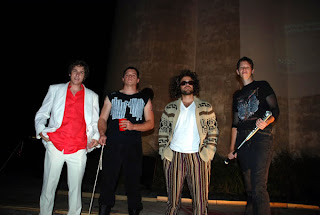 This was a dress-up show and though not everyone dressed up, the few people that did looked great! We had a couple of German nihilist – one with a little marmot on a leash. Jackie Treehorn showed up – the porn mogul. And even THE DUDE showed up. Tim, I don’t know where you came up with that sweater but it looked exactly like the Dude’s sweater. Unbelievable. In the end, the trophy for best costume had to go to The Dude – I guess more than anything because he was The Dude. Oh, I might add that me, my 7-month old son and my wife dressed up as little Lebowksi Urban Achievers (“…and proud of them we all are”).

After the bowling we pulled the plug on the lights and started the pre-show. As usual we had some old drive-in movie ads then we showed some funny bowling trick clips. There was also a short bowling montage video – something I threw together at the last minute – using footage from a 1960s Burnswick bowling promotional video and a Daft Punk song. I think some people like it – maybe I’ll post it here for future viewing. Once the pre-show was over we rolled the Feature Presentation – The Big Lebowski.

There were a few people that had not seen the movie – so to those of you – I hope you enjoyed the evening. You will never get to see the movie in that way again – that, my friends, was a once-in-a-lifetime experience. Cherish it.

I appreciate everyone who donated fundage – even if I wasn’t able to thank you individually. It demonstrates that you like the shows and want to see them continue. Your cash goes directly to the show, making it better, and it ensures that we can continue to host these community building events.

Thank you to everyone who helped – your efforts made the evening go smoothly. Thanks to James and El Reno Bowl for the trophies. Thanks to my friends and brothers who acted as our bowling pin-setters for the bowling tournament. Thanks to everyone who stuck around and help dismantle the bowling alley – that was record time (if records are kept on such things).

There are LOTS of photos from the evening and all will be posted soon. Also, if you took photos that you would like to see posted please send them my way [aaron47(at)mac(dot)com].